The 300th Derby of Vienna between Rapid and Austria was without doubt one of the most dreadful games of the whole season. However, the goalless draw says a lot about the general state of the Austrian Bundesliga. In a time, strangely enough, when Austrian football itself seems to be on the rise.

For the first time really, there are hardly any players worth considering for the Austrian national side playing in the domestic league – a very recent development that has started only a couple of years ago, when young talents started flooding predominantly the German Bundesliga. And it was last November when Swiss Marcel Koller took over the national team and stopped the common practice of selecting limited players from the Austrian league just because it was popular with the media.

When Peter Schöttel, 44 years old, became the Rapid manager last summer – he had spent his whole playing career there – after a surprisingly decent stint with unfancied no-names Wiener Neustadt, he found a club very much in disarray. Since Rapid’s last domestic title in 2008, they have lost tons of important players – among them Nikica Jelavic, now at Everton – but failed to replace them. Last season was especially poor, manager Pacult joined of all teams one of the Red Bull empire (at Leipzig), Rapid’s other arch enemy, and because of severe restrictions after supporters had caused last May’s derby to be abandoned due to a pitch invasion, the fans are on a constant collision course with the club’s officials.

The whole league has issues

Despite all this, and although they were playing very mediocre football, Rapid led the league going into the winter break. That was possible, because big spenders Salzburg keep on presenting themselves as a somewhat lifeless bunch of mercenaries unable to play together properly, defending champions Sturm Graz failed to win a single away game all season, and with uprising minnows Ried snatching a sensational second successive half-time-championship, even Rapid’s local rivals Austria Vienna are still very much in the title hunt. They played well in the Europa League, being somewhat unlucky missing out on the knock-out-round, but over the course of the season, they couldn’t cope with losing holding midfielder Julian Baumgartlinger to Mainz last summer. Now, in the winter break, they lost two more key figures: Offensive hub Nacer Barazite, by far the best player in the league, joined Monaco and winger Zlatko Junuzovic left for Werder Bremen.

Plus, the club parted ways with long-time manager Karl Daxbacher, who had established the team as one of the few actually able to create. 42-year-old Ivica Vastic – former Austrian International, main on-field-architect in Sturm Graz‘ astonishing Champions League years between 1998 and 2001, and the country’s only goalscorer Euro 2008 – was promoted from the reserve squad to find a new team as quickly as possible.

Austria: Cautious against a coutious opponent

Without Barazite and Junuzovic, Austria lost a lot of their creative abilities. Also, poacher Roland Linz got banned because he was an egocentric disruption for the whole team – so Vastic scrubbed creative play altogether. Which meant: His game-plan was similar to how his team played in the second half of last week’s 2-0 over Ried. Tomas Jun stayed upfront beside Roman Kienast without a link to the two banks of four in Austria’s 4-4-2 with two holding midfielders. Vastic was happy to let Rapid take the game to them and destroy, with most of the balls just kicked away blindly.

There were several problems with that. Firstly, Rapid weren’t even close to playing such a high defensive line as Ried did, so there was no possibility to get behind the defence with quick through-balls. Secondly, a link player was missing: Against Ried, Marko Stankovic (who got replaced by Jun) was constantly trapped in off-side, but his movement from deeper positions always made him available to receive passes. Jun, playing high up the pitch, was not.

And the third problem was that Austria didn’t score early, as they did against Ried. So there was no necessity for Rapid to risk anything. Manager Schöttel’s first aim, similar to many managers in Austria, was to avoid giving away goals. Centre-backs Pichler and Sonnleiter remained deep and holding midfielders Heikkinen and Prager disconnected Austria’s forwards from the rest of their team.

However, the movement of Rapid’s four offensive players in Schöttel’s 4-2-3-1 was very poor and they constantly got squeezed between Austria’s back-four and the midfield. Given the bad bad passing of both teams, hardly any balls really got to them – left winger Christopher Drazan had the fewest touches of all players on the pitch and playmaker Steffen Hofmann constantly slowed down possible attacks.

A game that shows the whole league’s problems

Lack of creativity is a very general problem in the Austrian Bundesliga. Teams like Sturm and now Austria play a 4-4-2 with two holding midfielders, so they’re over-reliant on their flanks making them predictable. Salzburg can’t make a quality squad work together, so there’s no use even talking about systems and game-plans, there. Ried, with the unusual 3-3-3-1 implemented by shrewd manager Paul Gludovatz, keep punching way over their financial weight, but in the end, the squad lacks depth.

And Rapid has a playmaker in Steffen Hofmann, who is highly popular and untouchable because of his achievements in the past, but this derby clearly showed that he can’t open up an opponent with quick passes, good ideas and elements of surprise anymore. He couldn’t do so in last week’s poor showing in the 0-0 at Wiener Neustadt, and much less against the far better defence of Austria.

Another big problem – most of all on an international level – is the fact, that even in 2012, the concept of pressing hasn’t come to the Austrian league yet. When teams play each other in the league, that’s not much of an issue, but when in comes to playing in Europe, Austrian teams are getting run over by teams playing good pressing.

The last in a long list of examples was Metalist’s 4-0 rout of Salzburg in the Europa League a few days ago. So, in the Viennese Derby, Rapid’s Heikkinen and Prager had all the time in the world looking for players to give the ball to, but hardly ever they found any. So they hoofed the ball long and no one could reach any of those passes.

Rapid also didn’t try to drag Austria’s defence out of positions by playing over the flanks. Austria’s Florian Klein, who replaced Gorgon for the second half, made it a little better: He started from the inside taking the game to the right flank to try to get behind Katzer.

Klein had two or three good runs, but this was not the solution to Austria’s lack of creativity. So Peter Schöttel didn’t have to fear anything if he took out one of his holders and gave up the numeric advantage in the centre. He replaced Prager with striker Atdhe Nuhiu, now fielding a 4-1-3-2. But that didn’t solve Rapid’s problems, too – because now, with one potentially creative player fewer, they were even more prone to hitting long balls. Austria didn’t have any problems defending all that.

How conservative (if not to say, cowardish) the approach of Ivica Vastic – offensive genius in his playing days – was, became evident in his substitutions. Simkovic for Liendl in midfield and Tadic for Kienast were direct swaps that didn’t change the game a bit.

Only James Holland started forward runs through the centre to exploit the space left after Prager’s substitution, but he only tried to win some free-kicks and didn’t succeed in doing so. He had, however, no problems in going by extraordinatily weak Markus Heikkinen, who collapsed completely after his safety net Prager was gone. But after Schöttel replaced Heikkinen with destroyer Kulovits, that problem was solved.

Conclusion: A mirror of the league

Doubtlessly, the 300th derby will go down as one of the worst ever. The big question: Is the lack of a quick, creative approch – not only in this game, but in the whole league – caused by unwillingness or by inability of the new, young managers? While young managers in other countries order their teams to play actively and take their game to the opponent, even emerging hopeful Austrian managers don’t take any chances.

On a small scale, the result are dreadful games like this one. And, in a bigger picture, an ever widening gap to international middle-class. Here lies the biggest danger of them all – getting blinded by the fact that the Austria league is on the rise in UEFA’s country ranking. Games like Salzburg’s 0-4 at home against Metalist Kharkiv are telling the true story. 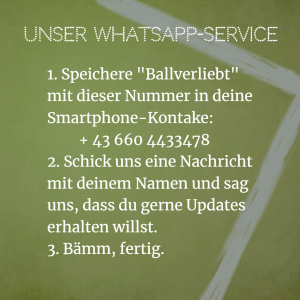